With the weather being so nice last weekend, it wouldn’t have been right not to venture out. Myself and a couple of the girls met in Oxford Circus, and decided to venture for a walk in Regents Park. First off, we stopped to get some coffees from Curators Coffee. This is a really cute little coffee shop on Margaret Street. Since opening, it’s been a go-to for lots of people from work. Nice, chilled out atmosphere and great quality coffee. I’ve never eaten there, but the cakes do look great! The cup sizes aren’t as big as Starbucks or the like, but I do think that the quality makes up for this.

Armed with coffees, we strolled up Great Portland Street towards Regents Park. I always forget how much I love this park. So pretty, with so many nice areas of flower beds, but also loads of great places for a picnic. After sitting in the sun for a bit, one of the girls left, so it was then just the two of us going for a wander. We were just having a casual stroll when before we knew it, we were up by the zoo. It can’t have taken us more than 20 minutes! As we had been planning to have a long walk, we figured, why stop there? So we decided to continue up to Primrose Hill.

I’ve never been to Primrose Hill, and as we walked to the top, there were so many people chilling and drinking champagne – such a good vibe! Once at the top, the view is amazing. It’s quite rare to find a view in London where you can see St Pancras Station, Canary Wharf and Battersea Power Station all in one go. The photo at the top was taken there, and it was beautiful. It made me realise how great London is in the summer. Sure, it would be nice to live somewhere hotter, but when it’s sunny in London, you really can’t beat it! 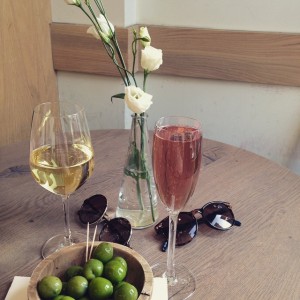 After our walk, we decided to reward ourselves with a well earned drink. We ventured down in to Primrose Village. It really feels like you’re abroad when the sun is shining there. Lots of quaint little bars and cafes, and a real cosmopolitan feel. We ended up at Negozio Classica, a cute little wine bar. They have a really good choice of wines, however, be warned, it is fairly pricy. And, they put the cheaper wines at the bottom of the wine list! I found that a glass of the rose prosecco was the same price as a glass of white wine, so naturally, I chose the bubbles. We also had some olives, which were lovely. The service in the bar was really good, but it was the prices which did put me off going back (unless it was pay day, and I was feeling flush)! For two glasses of white wine, two glasses of prosecco and two portions of olives, it was about £35…for us that felt like quite a lot!

By this point, we decided it was time for some food. We headed into nearby Chalk Farm and went to a great Thai restaurant, called Muang Thai. Surprisingly, for a Saturday evening, it wasn’t busy, and we easily got a table for two. We ordered a bottle of house white, a Beef Massaman Curry with Coconut Rice and a King Prawn Thai Red Curry with Steamed Jasmine Rice. I really wish I had taken a photo of the food, it was so tasty! The service was very efficient and quick, without feeling like you were being rushed. The portion sizes were perfect for one, and my Thai Red Curry had just the right amount of spice. I would definitely recommend checking out this restaurant if you’re in the area. They also have a raised wooden seating area for parties, where you all sit on the floor on cushions and eat. Great little place! I think our dinner came to about £45, which when you think about how much the drinks prior had cost, shows the great value too.

Following that, we headed out to a few bars in Chalk Farm. Details and the such start to get a bit hazy, so I’ll leave it there. But, what I will say, is that Primrose Hill is a great part of town, and perfect for if you want to get away from the buzz of the centre, and go somewhere much more chilled. The village feel really makes it feel like you’ve gotten away from it all.